Use of arms banned in Anloga and environs 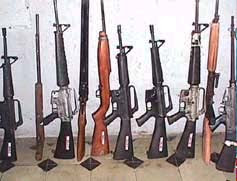 The Ministry of Interior has placed a ban on the carrying of arms in and around Anloga in the Volta Region and an Executive Instrument issued to this effect.
Mr. Kwamena Bartels, Interior Minister, announced the measure when he addressed police personnel dispatched to maintain peace at Anloga, following chieftaincy clashes there on Thursday, in which four people including a police constable were killed.
The Minister of Interior was at Anloga together with Mr. Albert Kan Dapaah, Minister of Defence and Mr. Joe Ghartey, the Attorney-General and Minister of Justice to assess the situation on the ground. They were taken round the scenes of the clashes including where the body of the police constable was damped near a lagoon and also visited the injured at the Keta District Hospital.Mr. Bartels on Thursday announced an imposition of a dusk-to-dawn curfew on Anloga as part of measures to put the situation under control.
He commended the police for exercising maximum restraint and acting professionally even though they lost a colleague in the fray. Mr. Bartels reminded the police that the crisis was not over and that they would be required to do their very best to enforce law and order, peace and stability in the area while upholding the rights of peace loving people in the area.Addressing a contingent of soldiers, Mr. Dapaah expressed confidence that they would put their peacekeeping experiences both locally and internationally to good effect at Anloga. He asserted that about 99 percent or more of the people at Anloga and its environs were peaceful and that only a few people were responsible for the trouble there.
Mr. Dapaah assured the soldiers that all the logistics and materials required for their operations would be put at their disposal. Except for Anloga where an atmosphere of apprehension could be felt with most of the people keeping to their homes, life in the surrounding communities appeared undisturbed as people were seen on their vegetable farms along the lagoon on Saturday while others went about their businesses.
Source:GNA