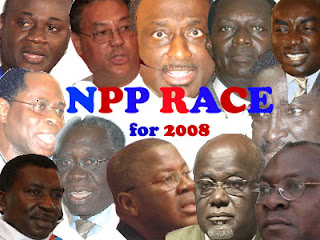 ..... All 18 paid their $25,000 non-refundable fee
The ruling New Patriotic Party (NPP) will today Friday announce a list of qualified presidential aspirants one of whom would lead the party in next year’s general elections to succeed President John Kufuor. The 18 presidential candidates went through a vetting process after they submitted nominations forms and paid a non-refundable fee of 250 million cedis ($25,000)

The non-refundable fee generated a lot of controversy with the media leading the charge and describing it as excessive. The media wondered how the presidential aspirants could afford such a high fee while the average Ghanaian is living in poverty.

Nana Ohene-Ntow is the general secretary of Ghana’s ruling party. From the capital Accra, he tells Voice of America (VOA) reporter Peter Clottey that all is set for the party’s announcement of possible presidential candidates.

“The applicants have all been vetted by the Vetting Committee. And we expect that any moment from now, the Vetting Committee would be presenting its report to the national executive committee. Once the vetting committee comes up with the list of people who have been cleared by the committee, those people would be presented at the congress, and they would contest,” Ohene-Ntow noted.

He said the party’s Vetting Committee has done its job and that Ghanaians would see their work after today’s announcement.

Ohene-Ntow said after the list of presidential aspirants is named, the party would then introduce them to partisans and the whole country amidst fanfare.

“On Sunday, the party would organize a platform in the central region, precisely at Kasoa during which all of those who have been cleared by the Vetting Committee to go to congress would be presented to the general public. They would be given the opportunity to showcase their ideas, and their visions and of course on congress day they would still have a chance to make a statement on what they intend to do should they be elected as presidential candidate of the party,” Ohene-Ntow pointed out.

He said although the party has been criticized for what some have called exorbitant non-refundable nomination fee, none of the presidential aspirants have complained about it.

“These are conditions that we stated very clearly in the application forms. And I’m sure you would know that the whole process was voluntary, no one was coerced to come and pick up the forms. And no one was coerced to return them and subsequently to file the nomination. And we take it that all those who picked up the forms and went ahead to file their nominations, read and understood the conditions, and ready to abide by them,” he noted. Clottey Interview With Nana Ohene-Ntow