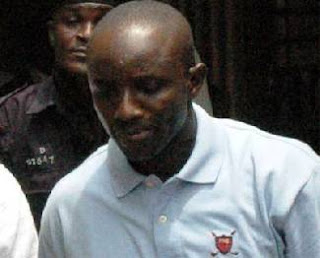 Tears flowed at an Accra Fast Track High Court on Wednesday when two self-confessed drug barons, Kwabena Amaning aka Tagor, and Alhaji Isaah Abass were sentenced to 15 years' imprisonment each in hard labour.

Relations of the two convicts wept uncontrollably as they were whisked away under heavy police escort from the courtroom to begin their sentences.

The judgement caught the accused, prosecution, defence, journalists and relatives by surprise, as the judgement date was to have been agreed on Wednesday.

Tagor was in POP and on clutches following an injury he sustained while playing football in custody.

The court found Tagor guilty for conspiracy, engaging in prohibited business relating to narcotic drugs because he confessed to about his drug transactions.

He was, however, acquitted and discharged for buying and supplying narcotic drugs.

The court presided over by Mr Justice Jones Victor Dotse, a court of Appeal Judge, also found Abass, 54, guilty for conspiracy and engaging in prohibited business relating to narcotic drugs. The court, however, acquitted and discharged him on charges of supplying narcotic drugs.

The court ordered that the sentences should take effect from the day of their arrest. Meanwhile the Serious Fraud Office last year, confiscated assets of the convicts.

The two were said to have made confessions about their previous dealing in the drug business at the residence of Assistant Commissioner of Police (ACP) Kofi Boakye in May last year. The said conversation was recorded and anonymously dropped at the Georgina Wood Committee set up by the government to investigate the missing 76 parcels of cocaine on board MV Benjamin, which docked at Tema last year. They pleaded not guilty.

Handing down the sentences, the court said it took into consideration the drug menace in the country and the fact that the nation was being used as a distribution point and the harmful effects of drugs among men and women.

"With the upsurge of the drugs in the country it behoves all of us to come together to fight the drug menace in the country," the court said. The court said sentences should be deterrent to others and corrective adding that it took into consideration the prime age of the accused persons.

The court noted that sentences were not prescribed by law and for that matter the court only used its discretion. The court was quick to say that some portions of the law had prescribed a minimum of 10 years.

Before handing over the sentences, Mr Ellis Owusu Fordjour, who represented Tagor, prayed the court to take into consideration the fact that his client was a first offender and pleaded that he should be dealt with leniently.

Mr Mohammed Attah who represented Abass drew the attention of the court of the days his client had spent in custody and prayed for the minimum sentence.

Ms Gertrude Aikins, Acting Director Public Prosecution (DPP), drew the court attention to the various stages in the drug business. According to her, while the users were fed by pushers, the pushers were also fed by the barons and prayed the court to met out punishment befitting the status of drug barons.