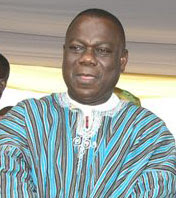 The Convention People’s Party’s flagbearer aspirant, George Opesika Aggudey is not happy with what he deems negative questions being raised about his bid to lead the party for the third time into general elections.Aggudey was the CPP’s candidate for the 2000 and 2004 presidential elections, and on Monday, he filed his nominations to contest the party’s flagbearer race, convinced that he was the obvious choice among six interested in the position.He did not take kindly to questions from journalists that his opponents claim he was not marketable and that after losing on two occasions, there was nothing to fight for again.“It is you who is not marketable, it is you. You join other political parties and you come to CPP premises to come and do what…don’t let me use the word on you,” an agitated Aggudey barely restrained his tongue from issuing the undesirable.When told that his critics say he has no chance in the election, Aggudey retorted angrily; “It is you, it is you, what chance do you have in life, you tell me? I am better placed in life than you are, you annoy me so much….” before party members and some of his followers who were on hand restrained the man harbouring dreams of becoming Ghana’s President.For Aggudey, his chances at annexing the CPP slot are as crystal, claiming that he already has the nod of party delegates to become the flagbearer of the CPP and so all he would be doing when the party goes to congress to elect a candidate would be to go for a confirmation of his mandate.Other aspirants who filed their nominations plus the GH¢10,000 (¢100 million) filing fees included Professor Agyeman Badu Akosa. He told journalists that he will as a matter of priority tackle the unemployment situation in the country if he gets the nod to lead his party and Ghana. Dr. Kwaku Osafo who also arrived at the CPP headquarters riding on the back of a motor bike, committed to strengthening the party to make it a formidable force capable of winning any election in Ghana.Lawyer Bright Akwettey and former Public Sector Reform Minister, Dr. Paa Kwesi Nduom also filed their nomination papers. Monday was the deadline for filing of nominations and the party says medical practitioner, F.W. Akuffo has already filed his nomination.(Play the attached audio to listen to Aggudey.)