2007 is a test of Ghana's democratic diplomacy - Nana Akufo-Addo 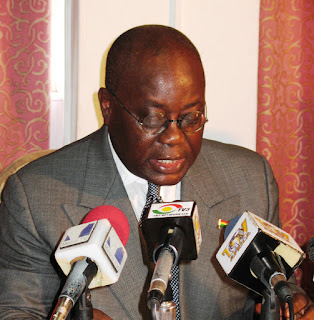 Nana Addo Dankwa Akufo-Addo, Minister of Foreign Affairs on Friday observed that this year, 2007 would be a test of the strength of Ghana's democratic diplomacy because of a number of Ghana's involvement in African continental and global events.
He mentioned particularly Ghana's hosting of the forthcoming Summit of the African Union to be held in Accra from 25th June to 3rd July 2007. Nana Akufo-Addo made the observation in a statement on the floor of Parliament to give a background to the Summit, and a report on the President's recent trip to United Kingdom, Portugal and Algiers.
He said the main theme of the Summit would be the direction of the Union on the sort of governmental system to regulate its affairs and lead it to a greater unity of purpose. The Accra Summit would also discuss the composition of the commission of the Union on who constitutes its executive arm and the African Peer Review Mechanism process, which would culminate in the peer review of Algeria, Nigeria and South Africa. Other issues on the agenda of the Summit are the unresolved conflicts in Somalia, the Darfur Region of Sudan and the renew tension in Cote d'Ivoire. "The killings in Darfur, which appeared to have escalated are a great blot on the conscience of Africa, which the continent cannot afford."
The Foreign Affairs Minister used the occasion to inform the nation of the Africa-Europe Summit scheduled for Lisbon in December under the joint sponsorship of the Portuguese presidency of the European Union (EU) and Ghana's chairmanship of the African Union. Nana Akufo-Addo said the Summit promises to seek to elaborate the basis of a new transformed relationship between Europe and Africa.
"The President took the opportunity of his presence in Portugal to engage the Portuguese leadership on the need to develop and expand the bilateral relations between the two countries," the Minister said, underlining the mutual advantage in terms of cultural exchanges that would be heightened between the two countries.